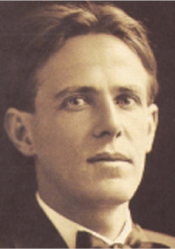 Vance Palmer lived in Emerald in Rose Charman’s cottage with his wife, Nettie, and two daughters Aileen and Helen from 1919 to 1925. His novel Daybreak (1932) recounted the Great Strike at the nearby Nobelius Nursery.

Between 1910-15 he spent time in England and France and briefly visited the United States and Mexico in 1912/13. He wrote prolifically churning out short stories, serials, music-hall sketches and poems. He married Nettie in London and was honeymooning in France when war was declared. His first volumes of stories and sketches, The World of Men, and verse, Forerunners, were published in London in 1915.

On his return to Melbourne he wrote for the Bulletin. His political outlook was increasingly defined by the labour movement. He developed an internationalist but anti-Imperialist perspective and produced a series of articles for the (Brisbane) Worker, ‘Towards industrial democracy’. He actively campaigned against conscription in 1916/17. Palmer enlisted in the Australian Imperial Force in response to the war crisis of March 1918 but did not arrive in France until three days after the armistice.

His best-known poem, ‘The farmer remembers the Somme’ was published in his volume of verse, The Camp in 1920. He wrote prolifically for the diggers’ magazine, Aussie between 1920-23.

His book Men are Human (1929) and The Passage (1930) won third and first prizes in the Bulletin novel competition and marked his arrival as a novelist of note.

Along with his wife and daughters he became closely involved with the Spanish Republican cause prior to the outbreak of World War Two. After the war Palmer returned to writing fiction and wrote some of his finest stories. Golconda (1948) was the first of a trilogy broadly inspired by the life of Queensland politician E. G. Theodore. Seedtime and The Big Fellow followed in 1957 and 1959.

His stories were predominantly rural, evoking the co-existence of man with place and nature. They were very much of the Lawson tradition but possessed a more sophisticated urban style.

Vance and Nettie were dedicated to the promotion of a national literature and emerged as leaders of a profession only beginning to recognize itself. They were bona fide intellectuals who extended advice and hospitality to countless aspiring authors.