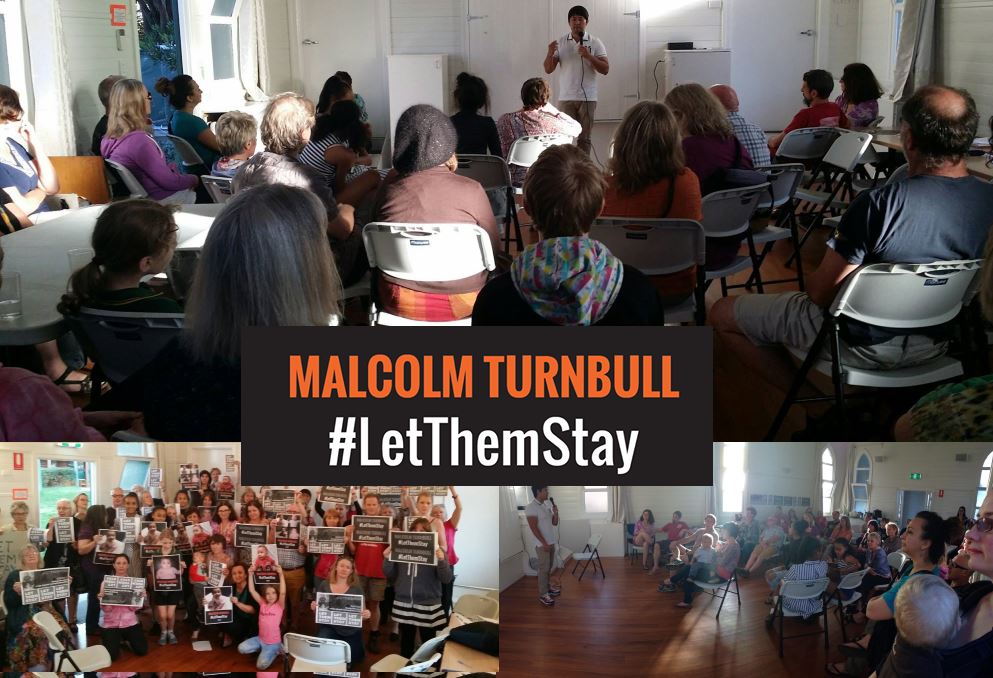 #‎LetThemStay campaign at Emerald Community House saw a full house on 24 hour notice to assemble Monday night in the ECH hall. Seriously, we could not have raised that many people for a bushfire planning workshop, even if we tried. Clearly, if you want to engage people, offer to discuss sanctuary for refugees – lesson learned. They show up.

Last night’s open mic revealed a significant unrest in those who attended, from young and old. Whole families showed up, mothers with babies, professionals, artists, fathers representing their families at home, children and immigrants. We heard first hand accounts from Rhemat, a native Hazara, about why people flee their homeland, his close calls with death at the hands of the Taliban and disturbing detention experiences of his friends. ” I have a Masters in finance, worked in a bank in Pakistan, had two small businesses but I had to flee because I wanted to live.” Rhemat loves Australians and knows full well that we are better than this. We are determined to live up to his expectations. We also heard from Brenna of Kindred, a grass roots organisation which supports the practical needs of refugees. These are people who are taking action, aren’t waiting for a change in government sentiment. They are getting stuck in now.

Many who attended the rally reported that they were very disturbed with the path that the government was taking as well as the opposition party, sending the 257 refugees back to detention and actually felt ashamed to be Australian. This is a pretty extreme impact on “born and raised” Australians, good citizens and all the rest. That same message was repeated in the scores of letters written on the night – “shame, disgust, cruelty and inhumane treatment” were the overall themes of the objections. These letters written on the back of pictures of refugee infants and posters will be sent to the government representatives.

Importantly, new friends were made, plans discussed, futures were forged and a new collective group of activists have found a supportive gathering place at Emerald Community House. While letters were written and addressed as an outcome of this inaugural meeting, we can definitely expect more assertive action from this bunch that still call Australia home.