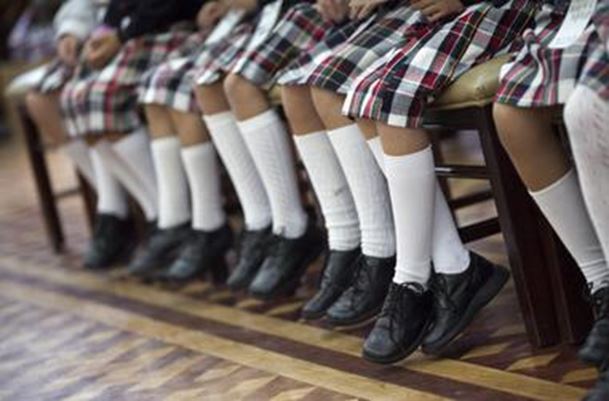 I am not against uniform polices, and I am not promoting free dress in public schools. Uniform polices are practical, convenient, and avoid stress and arguments (for the most part) for younger children and parents. Schools’ correlating colours can bring a sense of pride to the school communities, as well as representation on excursions. However, the first and foremost goal of school is to educate its students. School is a place of teaching and learning. When education is not happening as a result of the punishments regarding a public school’s strict uniform polices, there is most definitely a problem with the policy – and not with the student.

There is no proof that by wearing a school uniform it makes one a better person. What a student wears does not determine how they should be judged or what kind of student they are; such as having piercings or coloured hair doesn’t make one a ‘rebellious’ student. Public schools generally consist of a basic uniform with a wide range – rigid conformity is not something that should be demanded nor expected. Students should have some individual control over how they wear their uniform. Having a flexible uniform allows students an opportunity to practice judging what is appropriate to wear. On the other hand, an inflexible uniform does not teach much. The simple fact still remains that older teenagers should be allowed to choose what colour they dye their hair and if they want piercings. Why? Because they are not five years old. It ties into the argument regarding the simple fact that it is their body, and they are old enough to make those decisions.

Nobody likes being told off, especially for when it’s something they don’t agree with. When a school has a strict uniform policy, the endless petty issues about what a student is wearing can damage student/teacher relations; something that is especially important in the older years. When you think of the useful things students could learn during the times wasted by focusing on uniforms, it really does seem ridiculous. It is believed that with a tighter uniform policy, the discipline problems will decrease, however this is not the case. When there are rules, those rules must be enforced. More uniform codes mean more rules, so logically; the stricter a dress code, the more effort it will take to maintain it. A National Education Policy Centre report explained, “Dress code referrals are especially time-consuming because they often involve students changing clothes or waiting for parents to bring them new clothes. It can sometimes take more than two hours for a parent to leave work, stop by their house, grab clothes, and bring them to school. This is valuable class time that is lost for the student.” (Kate, E., 2014).

Students are told that they can’t dye their hair, have noticeable piercings, wear jewellery, or wear clothes anything from outside the strict guidelines of the policy. They do not have the freedom to make their own choices in how they express their selves through appearances. This hinders their ability to express their personality, creativity, imagination and self-expression. Schools which segregate their uniform to female and male categories limits students in being comfortable to wear whatever they choose. This can include transgender students.

On debate.org, 73% said that teachers should be made to wear a type of uniform as well as the students. Some of the points arisen are that the teachers spend the same amount of time at school as, if not more than, the students. It suggested teachers should show ‘school spirit’, and to distinguish between adults that teach at the school campus and those who don’t. However, I don’t believe teachers should be made to wear a uniform as well, but rather students should be given the same freedom. Nevertheless, if teachers are permitted to teach and represent their school whilst having colourful hair and piercings, why should students be restricted? Why are reasons such as “it’s for presentation and appearances” being made when teachers have proven there is no link between the two?

A teenage girl in America dyed her hair purple over her school holidays, and when she went back she was told she would not be allowed to attend classes with her purple hair, would not get a student ID, and would receive an in-school suspension for every day her hair remained dyed. When she confronted her school board about the outrageous issue, she was told her purple hair “…was a distraction for other students and unprofessional.” She posted a picture on her Facebook page saying “I’m being denied an education because of the colour of my hair.” It has been shared over 20,000 times (Steinkellner, K., 2015).

Throughout public schools across Australia, policies clearly read one of the reasons they are enforced is so that the goal is “to further develop a sense of pride with the school”. But I ask, how can students feel prideful about a school that interrupts learning to give out needless suspensions and detentions for what they are wearing?
“Their clothes/piercings/hair colour are distracting others!” I hear the schools shout back. Students should not be blamed for someone else being unfocused in class; unless they are deliberately distracting others from doing their work, it is not the students fault. The most distracting thing for a student is when a teacher removes them from class and stops their learning, just to inform them that the uniform they are wearing does not fit with the school’s policy, and gives them some form of punishment, further disturbing vital learning time.

At a Victorian public high school in 2015, year 12s in the midst of their exam preparation were being sent home or detained from classes all day because they were wearing the incorrect uniform. Many were being punished for trivial things such as white stripes on their black shoes. Not only was this violating the Victorian School Uniform Policy guidelines, but insanely detrimental to their desperately needed study time.

The official Victorian Department of Education regarding public schools outlines that guidelines and policies are permitted. The general intent is that approvals which exclude students from learning, such as suspensions and expulsions, are prohibited. Commonly, education departments all over Australia encourage schools to pursue agreement of uniform policies through ‘positive reinforcement’, rather than punishment (Victorian Department of Education, 2007)
In 2014, the Victorian State Government stated that all dress codes for schools must meet:
– human rights and anti-discrimination requirements
– include an exemption process
– Health and safety considerations
– Requirements relating to uniform supply arrangements.

A Victorian public school can make students wear a particular uniform, as well as take reasonable measures to punish those who don’t follow the rules. But did you know that the school cannot suspend or expel a pupil for not following the policy unless they have tried all other options which haven’t worked. You are also allowed to ask for a copy of your uniform policy, and your school must comply and be able to give you a copy (Lawstuff, 2015).

What isn’t appropriate:
– Sending students home
– Not allowing students to attend school
– Interrupting students’ learning to punish them for a non-uniform item
– Taking them out of class/detaining them from attending class

Overall, I encourage students to question seemingly unreasonable policies and push for agreeable changes. Read the school uniform policy and check if your school Is following it, or taking it further. Have petitions and get students, parents and teachers to help and sign. Raise issues with the school principal or bring up with the school council.

Steinkellner, K., 2015. When this girl’s school called her dyed hair a “distraction,” she fought back. [Online] Available at: http://hellogiggles.com/school-dyed-hair/
[Accessed 17 March 2016].